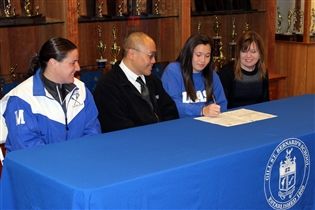 Posted 11/21/2014
Kaila Gong ’15 first picked up a lacrosse stick in second grade. From the moment she felt the power behind the rubber ball landing perfectly in its pocket, Gong knew lacrosse would become the only sport for her.

“I picked up that stick and since then I haven’t stopped,” said Gong who—over the past 11 years—has attended countless practices and games at the recreational, club and high school level.
Gong’s hard work paid off this past week, when she became an official Class of 2015 recruit in the University of Massachusetts-Lowell women’s lacrosse program. With her parents, Susan Nicholson and Kenneth Gong, as well as longtime coach Jen Marrosu, there to show their support on November 17, the rising midfielder signed a National Letter of Intent to play for the Division I university.

Marrosu and Gong were first introduced through the T3 Lacrosse Club six years ago. Since then, their relationship as mentor and mentee has developed, growing even stronger when Marrosu joined the GSB coaching staff in 2013. “As her coach, I have had the privilege of watching Kaila evolve not only as a lacrosse player, but as a person and a leader. Kaila stands out as a leader both on and off the field, and sets a positive example that hard work and dedication can truly pay off,” said Marrosu.
The lacrosse program at Gill St. Bernard’s began as a club sport during Gong’s freshman year, progressed to the JV level in 2013 and continued to varsity this past spring. Being a part of the program since its inauguration will make letting go that much more difficult for Gong. “I’m definitely going to miss the girls because I was there at the very start of it all,” she said. “A lot of my teammates look up to me because I’ve been playing the sport for so long. I’ve helped them work on their skills and techniques and, through the past four years, have enjoyed seeing everyone become better players.”
As she moves on to UMass-Lowell next fall, Gong reveals her excitement to begin a new chapter in life, filled with fresh experiences and a different group of teammates with whom she can learn and grow.
Back