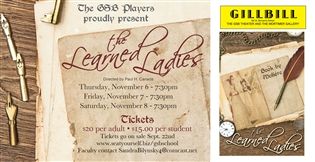 GSB Players to Return to the Stage Next Week

Posted 10/30/2014
Catch the next installment of Gill St. Bernard’s performing arts troupe, the GSB Players, on stage in “The Learned Ladies” from November 6 until the 8th.

Since 2007, the GSB Players has received 18 Paper Mill Playhouse Rising Star Awards for excellence in the arts. Join this fall’s 16 new and returning cast and crew members for an unforgettable evening of laughter and applause at 7:30 p.m. each night in the GSB theater.
Molière’s classic comedy, “The Learned Ladies,” satirizes a household where common sense is diminished and pedantry rules. The play features three most unliterary ladies—Philaminte (Alexandra Baker ’15), Belise (Erin Wetzel ’15) and Armande (Jamie Goetchius ’15)—intent on having a high-toned literary salon much to the chagrin of Philaminte’s husband, Chrysale (Lachlan Wright ’17). These women have neither literary nor common sense, making them easy prey for the flattering con artist, Trissotin (Mycroft Zimmerman ’16), who passes himself off as a famous poet and becomes their permanent houseguest. Philaminte hopes to wed her youngest daughter Henriette (Katherine Coscia ’15) to Trissotin. Henriette, her father, Chrysale, and her uncle, Ariste (Aniello “Neil” Ianniello ’16), however, contrive to thwart Philaminte’s plans by marrying Henriette to her one true love, Clitandre (William Conlan ’16), despite his apparent unsuitability.
Only a few tickets remain for Saturday night’s performance, and Thursday and Friday are filling up fast. Reserve a seat today at seatyourself.biz/gsbschool and don’t miss the chance to see the GSB Players in action.