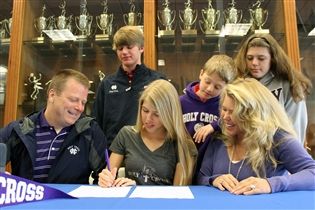 Posted 4/28/2014
A new tradition begins for the Benoit family, as “GSB Lifer” of 13 years, Alexandria ’14—the oldest among four siblings—prepares to carry both her academic and athletics career beyond Gill to the College of the Holy Cross in the fall.

Benoit first took up running at the early age of 10, completing a one-mile race with her hometown, Chester’s, local cross country club each Sunday. Since then, running has become more than just a sport for the 18-year-old athlete; it has evolved into a way of life. According to Benoit, running has played a significant role in her development as a student, athlete and person. “I’ve learned a lot about myself, both mentally and physically, since I’ve started running,” says Benoit. “It’s helped me to become a positive thinker and has also taught me to manage my time effectively when not attending practices or competing in meets.”

Since 2010, Benoit has participated year-round for the Knights, all the while maintaining a 3.8 GPA in the classroom, starting a babysitting business at home and volunteering her free time at assisted living facilities for the elderly. “Participating in these activities, and more, has helped me in so many ways, especially with getting into college,” says Benoit, who visited multiple schools before officially committing to the Holy Cross athletics program earlier this month. “The thing that drew me most to Holy Cross was the genuine and caring people that I met,” she adds. “I’m looking forward to having an instant connection with my new team and being able to participate alongside some really talented runners.”

Among Benoit’s new teammates lies a very familiar face, GSB alumna Emily Iannaconi ’13 of Long Valley, N.J., who mentored Benoit throughout high school and will continue to guide her on the right path in college. The soon-to-be-reunited team members were first introduced in 2009, when Benoit was paired with Iannaconi as part of the Middle School division’s shadow system—an opportunity for rising eighth grade students to experience a day-in-the-life of a freshman. Benoit’s joining the varsity cross country team her first year of high school only helped to solidify the girls’ growing friendship, as the duo often set pace for one another at running practices every season over the next three years. “I remember finishing my last 4x400 as a senior and thinking to myself that that would be the final race we’d ever run together,’” Iannaconi shares. “I truly never thought I’d have the opportunity to run with Alex again, and am excited to relive the old times as well as create new memories beginning in the fall.”

While Benoit’s GSB track career was highlighted by a number of events, including relays, the 100m, 800m and long jump, she hopes to focus strictly on middle distance running throughout her four years with the Division I Crusaders. Iannaconi, once again selected to show Benoit the ropes as an incoming freshman at Holy Cross, is beyond confident that her friend will have no trouble fitting in. “Although at a larger level, Holy Cross is much like Gill in that both share the same community feel,” says Iannaconi. “No matter where you go you always know someone, and I have no doubt Alex will feel very comfortable here.”
Back