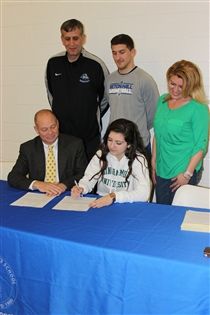 Posted 4/22/2014
With the average women’s basketball player towering a good five inches above her, 5’5” point guard Jasmine Sina of Lake Hopatcong, N.J. has worked diligently on the basketball court since age seven in hopes of someday securing a top spot at the Division I level. Undeterred by her less-than-average height on the court, Sina has added 1,300 points to the Gill St. Bernard’s scoreboard over the past four years, and will continue to reach great heights as Binghamton University’s first Class of 2014 women’s basketball recruit for the 2014-15 season.
Binghamton’s newly appointed head women’s basketball coach Linda Cimino first took note of Sina’s strong work ethic at an open gym this past fall. An associate athletic director and head women’s basketball coach with Caldwell College at that time, Cimino initially invited Sina to join Caldwell’s growing Division II program. When the 17-year-old politely declined, making clear her overall intention to play at the DI level, Cimino’s interest did not falter. “She continued to track Jasmine,” explains GSB’s Head Varsity Girls’ Basketball Coach Josuf Dema, “and when she got the job at Binghamton, offered her an even greater opportunity: to become the new face of the BU program.”

Sina made her first trip to Binghamton’s 930-acre campus in upstate New York on April 13, where she joined Cimino for a tour of the university’s expansive athletic facilities. By the following day, she was ready to commit and signed an official National Letter of Intent alongside her parents, brother and headmaster in the Gill St. Bernard’s Athletic Center that same week. “It’s a huge campus, which will take a bit of adjusting to,” says Sina, “but, other than that, it seems like a really great community in support of BU’s overall athletics program. Coach Cimino really believes in how I play and I’m looking forward to guiding the Bearcats down the right path.”

Recognized for leading the Caldwell Cougars to a much improved 128 wins and 100 losses in just eight years, Cimino will confidently look toward incoming freshmen like Sina to restore the struggling Binghamton women’s basketball program, which finished 5-25 this past winter. “Jasmine has really shown her true colors over the last two years, becoming a constant leader both players and coaches can look up to when times get tough,” says Dema. “She never forces a play on the court and is skilled at making the right calls for her team.”

Since freshman year of high school, Sina has helped the Knights to three Somerset County Championships, three Skyland Conference Delaware Division titles, two State Sectional championships and one Non-Public B State crown. “Basketball was probably one of the best experiences of my Upper School career,” she says. “I’ve gotten a lot of exposure while playing for Gill and have established many friendships along the way. While I’ll miss my GSB teammates and our amazing chemistry on the court, I’m excited to have finally reached my dream of playing for a Division I school.”
Back