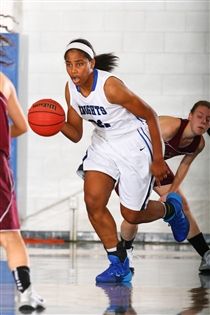 Included among the nominees was Gill St. Bernard’s own Taylor Rooks ’14. Rooks joins in this honor with a talented group of players from some of the nation’s top basketball programs.
The 6-foot-1 senior, with a 4.2 GPA, signed an official National Letter of Intent with Stanford University on November 13. “Taylor is a self-motivated young woman, and that trait has played a huge factor in her success on the court,” said Josuf Dema, head varsity girls’ basketball coach. “She did a phenomenal job last winter when she led the seven-member varsity team to a 23-5 record, its second consecutive Somerset County Championship title and the NJSIAA Non-Public B South Sectional finals.”

Since making her debut with the Knights in 2011, Rooks has led the girls’ team to back-to-back Somerset County Tournament championships (2012 and 2013) and scored her 2,000th career point during the annual Mount St. Dominic Holiday Festival on December 29. Rooks was also named the 2013 Gatorade® New Jersey Girls’ Basketball Player-of-the-Year.

The final team for the 2014 Games will be announced on the nationally-televised McDonald’s All American Games Selection Show on ESPNU on January 29 at 6:00 p.m. ET. From the nationwide field, 24 female athletes will be chosen to compete in the 13th annual McDonald’s All American girls’ game on April 2. The event will be held in Chicago’s United Center beginning at 7:00 p.m. ET.
Proceeds from the Games benefit Ronald McDonald House Charities® (RMHC). To date, the Games have raised more than $10 million to support RMHC’s mission of improving the health and well-being of families and children.
Learn more about this year’s nominees at NJ.com.
Back