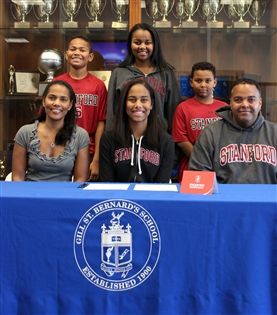 Posted 11/21/2013
Taylor Rooks ’14 is the quintessential student-athlete. Through the first semester of her senior year she maintains a 4.2 GPA and is ranked among the best high school basketball players in the country. As captain of the GSB girls’ basketball team, this nominee for the McDonald’s All American Games® leads by example, continually motivating her teammates to become better players and individuals. These leadership qualities, along with her skills on the court and in the classroom, resulted in the best collegiate programs taking notice. Rooks signed an official National Letter of Intent with Stanford University on November 13, making her the third Division I girls’ basketball recruit produced by GSB in just five years. Rooks is another one of Gill's very best on her way to a great school, as well as being a member of one of the top women's basketball programs in the country.
Rooks considered several Ivy League schools such as Harvard and Princeton before verbally committing to Stanford on October 14. In her opinion, it was the best fit for a real student-athlete. “Stanford offers the best of both worlds,” said Rooks. “I feel that going there will give me the greatest opportunity to maximize my potential as a student and as an athlete.”
Since she arrived at Gill in 2011, both teachers and coaches have recognized Rooks for her strong work ethic and willingness to learn. Director of Athletics David Pasquale said, “She is incredibly talented on the court and equally as impressive off the court. We are very proud of the way she’s represented our school.”
Rooks’ many athletic achievements include the 2013 Gatorade® New Jersey Girls’ Basketball Player-of-the-Year award. In addition, she is ranked the 19th-best high school girls’ basketball player in the country by ESPN HoopGurlz, has been named Somerset County Player-of-the-Year and has earned All-State recognition. And, she shared plans to maintain her hard-working mentality next year. “Whether by putting in extra hours of studying, or working after and before practice on my own, I will continue to make myself the best I can be,” she said.
As the 6-foot-1 senior graduates from the Knights, along with two classmates Trevena Bennett ’14 and Jasmine Sina ’14, she remains confident that the team she has helped to build will continue growing. “Even without us, Gill still has a great team with great players, and I have no doubt in my mind that they are going to do well next year,” said Rooks.