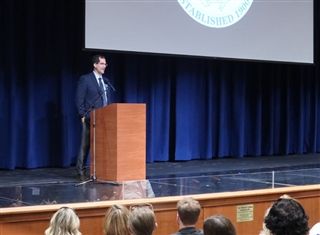 As August fades from our view, it occurs to me that there are some families who have spent a good part of the summer sliding paddles and canoes into becalmed tidal rivers all along the mid-Atlantic coast. For the last few years, my refuge for such long, hazy days has been the Patuxent, one of the tributaries of the Chesapeake Bay. With its blue cranes and red-winged blackbirds, colonial mansions and swaths of muddy cattails, it invites exploration and conveys calm grace.
A canoe on such water slips easily into analogies about tranquil progress and steady assurance. We may think about how the canoe embodies efficient movement, continuity through variation, or any number of other ways to say that moving ahead is best when it leaves barely a ripple. However, on the Patuxent, close to the tidal shore, little fish called mummichogs strongly disagree. For them, the steady calm means great disturbance. Whereas we relax and go with the river’s current, they flee, leap, or dive—skipping and plopping like pebbles—whenever a canoe comes near. Some even run headlong into metal sidewalls in their haste. Because their perspective is limited, they see movement not only as a cause for fear, but also as an obstacle to success. Luckily, we in the GSB community have a higher viewpoint than mummichogs in our understanding of change.

An old friend of mine once said that joining a new school family is a bit like standing up in a canoe—ultimately safe but slightly wobbly. I was feeling a bit wobbly earlier this summer, having moved away from the familiar routines of a well-worn life in much the same way that we had moved away from the Patuxent, the mummichogs, and the songs of red-winged blackbirds among cattails. Fortunately, in the roiling days of July our family happened upon Loantaka Brook near Morristown. Turning a corner on the trail, I found in front of me a stand of cattails, and stepping closer I saw the flash of color, then recognized the familiar call of a dozen red-winged blackbirds. At that moment, my emotional canoe became decidedly less wobbly, and now having worked closely with the welcoming families and faculty at Gill St. Bernard’s, that canoe has resumed its course, steadied by the knowledge that in this community, difference is interesting, new faces are exciting, and change merely means that all is as it should be.

The other day, I happened upon Paul McCartney’s song, “Blackbird,” and was struck by the lyric: “You were only waiting for this moment to arise.” Indeed, this September is the moment we all—students, parents, teachers, and administrators—have been waiting to arise. Let’s push off from the shore, find the current, and head out for the yet unknown.
Back