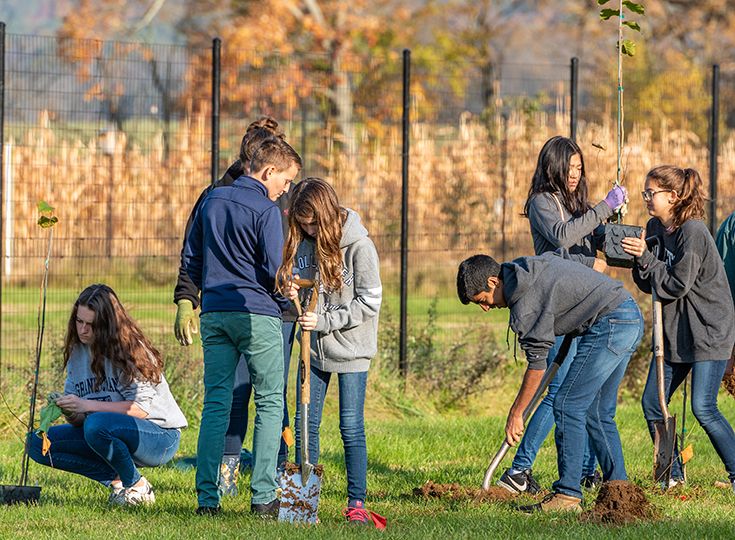 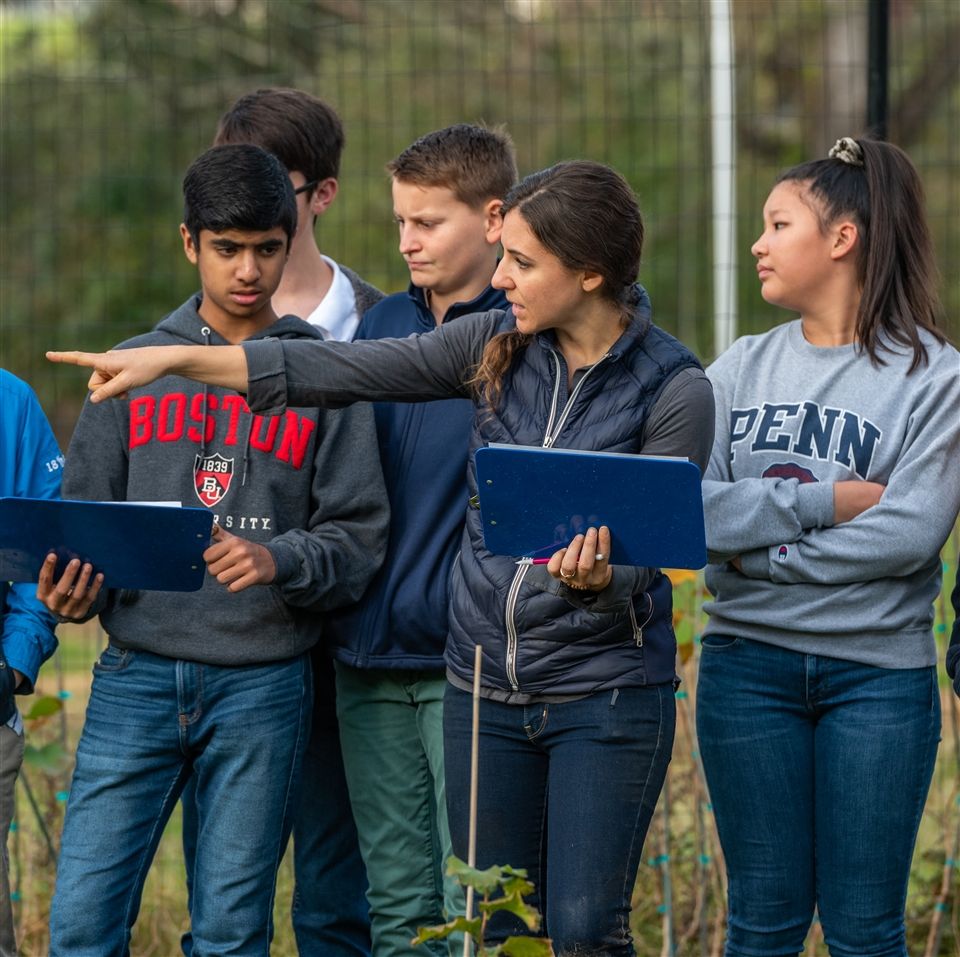 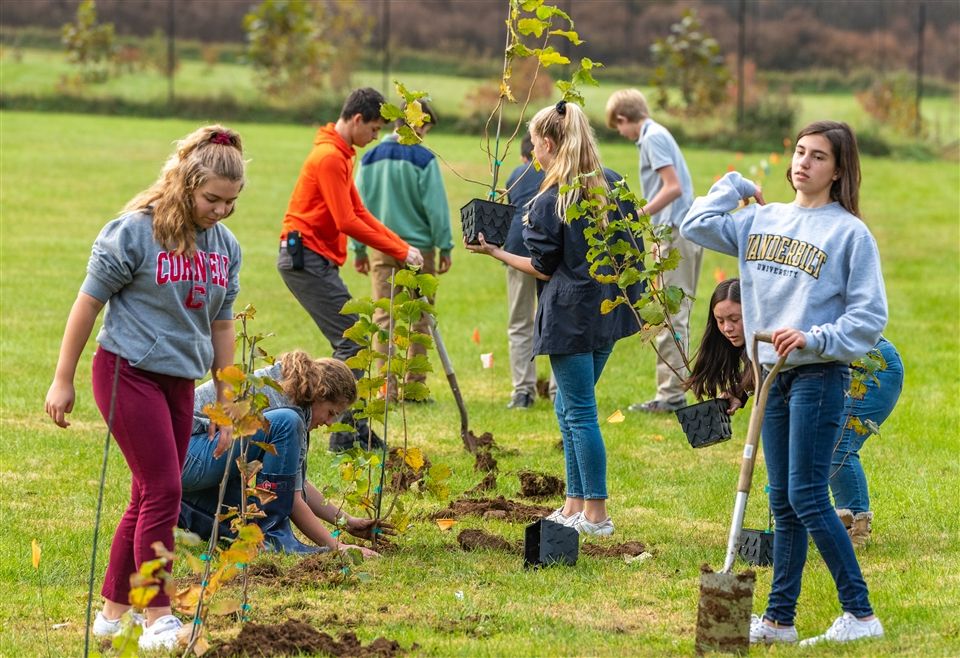 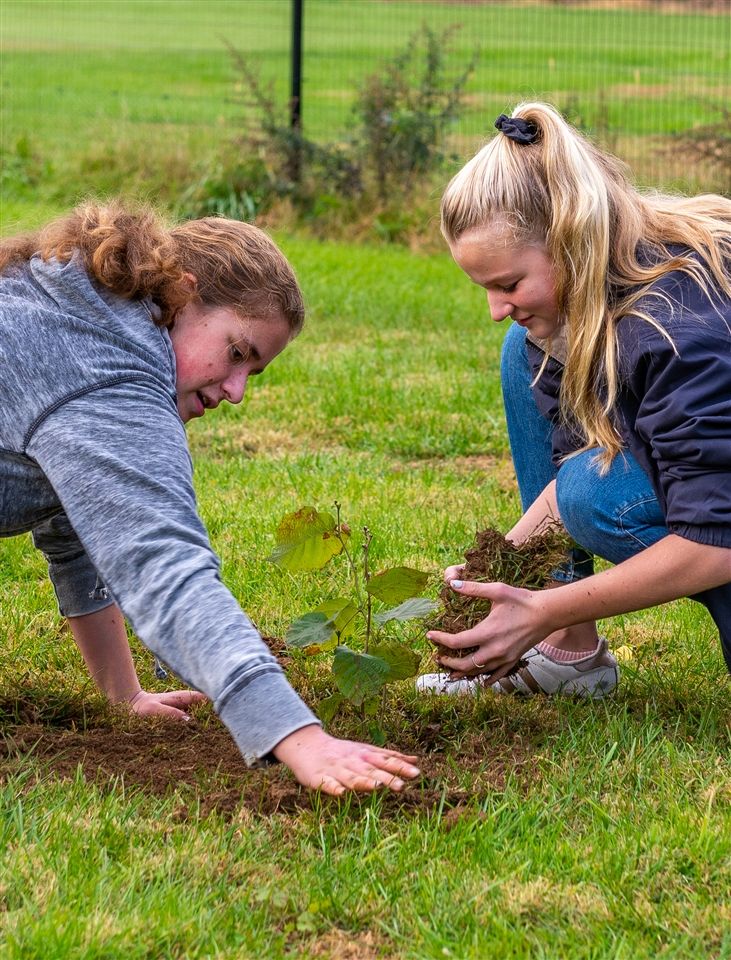 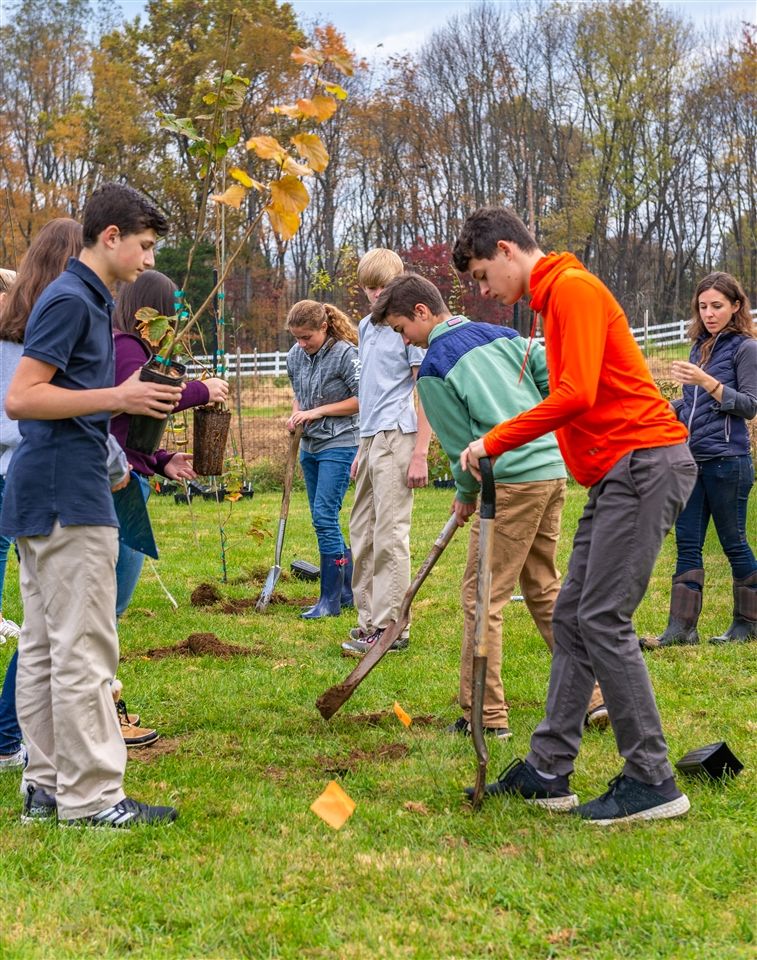 Posted 11/20/2018
In early November, eighth-grade science classes planted 230 hazelnut trees in the field next to the campus garden, with an additional 250 trees scheduled for the fall of 2019. Throughout the day, numerous faculty members along with some sixth- and seventh-grade classes stopped by to lend a hand.
The trees are special hybrid varieties developed by Rutgers University in collaboration with Oregon State University, the University of Nebraska and the Arbor Day Foundation. Referred to collectively as the Hybrid Hazelnut Consortium, the group started working more than a decade ago on developing hazelnut hybrids with the potential to be grown commercially in the mid-Atlantic region of the United States.
Currently, hazelnut production is concentrated almost exclusively in Europe. Unfortunately, when the European variety is planted in the United States, it develops a blight. In contrast, trees that grow well in the states do not produce hazelnuts large enough for commercial applications. The consortium, however, believes that its hybridized trees will combine the best of both worlds—resulting in a plant that is disease resistant, cold hearty, and commercially viable.
In December of 2017, eighth-grade science teacher Alana Baer first contacted Rutgers University about having the GSB campus serve as a test site for the trees. “I was exploring agricultural initiatives that we could incorporate into eighth-grade science and I learned about the work going on at Rutgers,” Baer says. “I contacted Professor Thomas Molnar, who is leading the project, and we have been in conversation since then.” Baer notes that Rutgers will remain involved with the project for several years, even after the trees start producing hazelnuts. “Professor Molnar, graduate students and others involved with the study will visit our campus to monitor the growth of the trees, talk with our science classes and evaluate the hazelnut crops, the first of which is expected in the spring of 2021.”
Baer says that hazelnuts met all of her criteria for an agricultural initiative: low input, (no tilling, pesticides or fungicides), economically sustainable and good for the local ecology. In addition, she describes the chance to collaborate with a major university as a win all around. “It will be a great learning opportunity for our students, it helps the hazelnut consortium, and if the trees prove viable, it could have benefits for New Jersey agriculture,” she offers. In addition, Baer explains that perennial crops, such as nut trees, are beneficial both from an agricultural and an environmental perspective. “Once you plant them and get them through the first season, they no don’t need to be fertilized, re-planted or even watered,” she says. “Perennial crops require fewer resources and are less labor intensive. In addition, trees improve air quality and build soil.”
Although it will take two to three years to really know how the various hybrids strains are performing, there is lots of work for Baer’s students along the way. This year’s group of eighth-graders is researching the advantages of perennial crops and learning about hazelnut production. In the spring, the students will start monitoring the growth of the trees and charting that data. “We plan to attach a tag to each tree with a QR code that links to all of its data.” Baer says.

“The hazelnut project is an exciting study.” Baer offers. “If the hybrids thrive, hazelnut production could eventually become a significant part of New Jersey agriculture. And years from now, these trees will still be part of our beautiful campus.”
Back