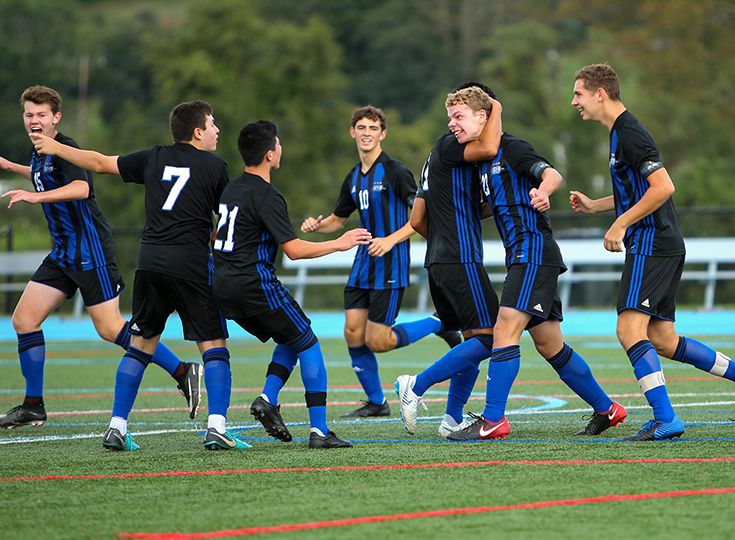 Knights Use Huge Second Half to Advance in State Tournament

Posted 11/2/2018
The boys’ soccer team defeated Hawthorne Christian Academy in the quarterfinals of the North, Non-Public B sectional championships on November 1 to advance to the semifinals. The Knights led the Defenders 1-0 at halftime and exploded for three more goals in the second half to put the game away with a final score of 4-1.

“Hawthorne played pretty inspired ball,” said head coach Tony Bednarsky. “They were a tough nut to crack but eventually we got through. I was very happy with our team’s performance, but we still have some unfinished business left.”

Andrew Moglianesi ’19 got things started for Gill as he connected on a beautiful goal to put the Knights up 1-0 late in the first half. He picked up where he left off after halftime with another goal to make it 2-0. Micaah Garnette ’21 and John Baber ’19 also scored for Gill and Jacob Siegel ’20 contributed two assists. Alex Borto ‘22 had five saves in the win.

Gill’s opponent in the semifinals will be top-seed Dwight-Englewood. The Bulldogs have had a strong season as they boast a 17-1-1 record and are currently the eighth-ranked non-public school in New Jersey.

Despite being the lower seed, Bednarsky is confident in his group of players.

“We are on a mission and we have to go and pull off an upset which we feel we are very capable of doing,” he said. “They are the top seed so they earned the homefield advantage and they will definitely have it because it is a grass field and we are used to turf. I am sure they will have a good home crowd on hand so it will definitely test the mettle of our kids. But I like where our team is, we have won nine of our last ten games; we are battled tested and we will give our best shot.”

The semifinal game will be played on Monday, November 5, at 2:00 p.m. at Dwight-Englewood. Good luck Knights!
Back