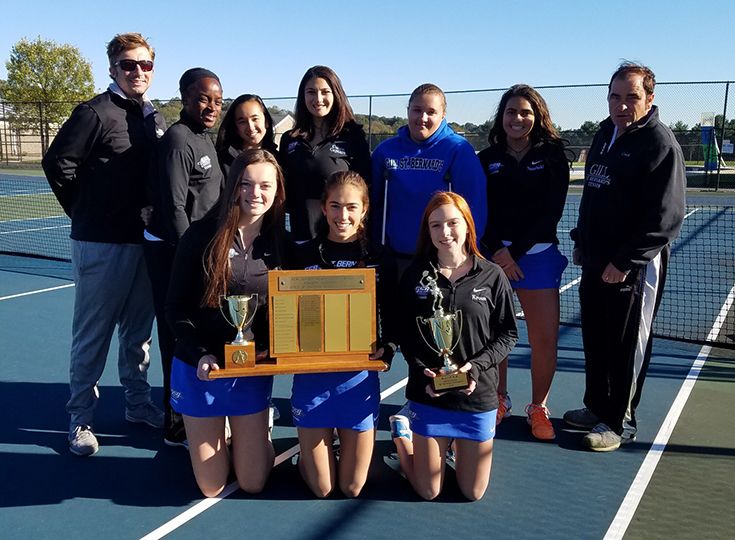 Posted 10/19/2018
The girls’ tennis team won its fifth Prep B championship in program history and its first since 2010 on Wednesday, October 17, at the Garden State Tennis Center. Three Knights won individual titles to help Gill capture the overall team championship.

“When we were growing up, we would hear about the high school team and the success it would have,” said Ella Baker ’21 who defended her title in second singles. “So, to win this title and add to that success is awesome.”

“Honestly, being able to win the first singles title was very important to me,” said Jean-Pierre. “My season was not as great as I was hoping it to be and I did not go as far into states as I had planned, so I am very happy to come away with this win.”

Michaela Kroon ’22 took home the title in third singles. She was the sixth seed heading into the tournament, which admittedly surprised her since she had only dropped one match all season, but she did not let her ranking affect her play.

“I was a little confused about being the sixth seed,” said Kroon. “However, it ended up motivating me to outperform that seed and it was just such a great experience to be able to win as a freshman.”

With all three Knights coming back next season, the future certainly looks bright for the girls’ tennis program here at Gill.

“Gill has not won a Prep title in a pretty long time,” said Jean-Pierre. “I think this will have a great impact on the program and the school as well.”
Back