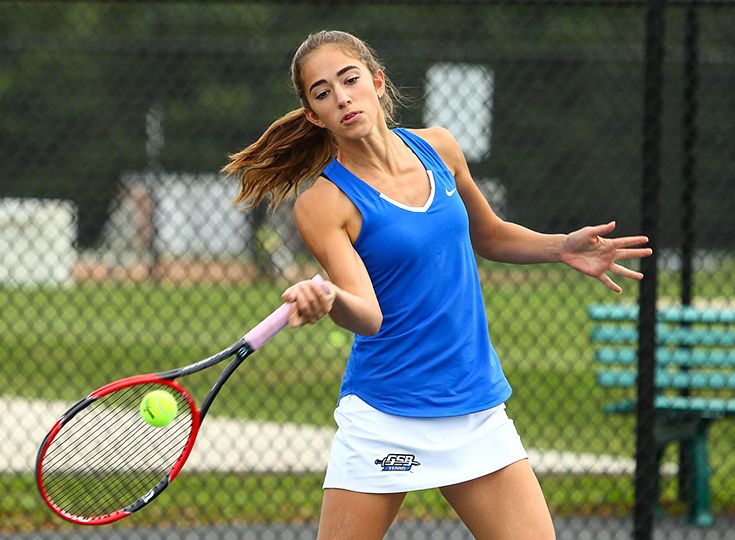 Posted 8/22/2018
The girls' tennis team looks to build off last fall’s terrific season that saw the squad go 14-2 and claim the Raritan Division title for the seventh year in a row. It was also a memorable year for head coach Patrick Hensley as he took home Skyland Conference Coach of the Year honors in his first season with Gill’s program.
"It was awesome," Hensley said about last season. "I did not expect to have all that success. We had a few good kids and it was a bit of a surprise, but we definitely enjoyed it all. It was fun to build it up from pre-season all the way to the state tournament."
This fall, the Knights have eight returning players who received all-conference honors, with Lexi Meola '19, Tori Goldin '20, Ella Baker '21, and Mayjah Jean-Pierre '21 all having earned 1st Team All-Conference selections.

Jean-Pierre (first singles) and Baker (second singles) were also named 1st-Team Prep B, an amazing accomplishment for freshmen. With a year of varsity tennis under their belt, these two sophomores will be expected to help lead the program through a tougher schedule and a deeper state playoff run.

"We lost in the state semi-finals last year, so to be able to advance to the championship and win the championship would be the main goal this year," says Hensley. "We are playing a tougher regular season schedule, but we look forward to that because it will better prepare us for when we face the elite teams in the playoffs."

With such a deep returning roster and a more challenging schedule to prepare them for a state title run, the Knights have a great chance to reach all of their goals.